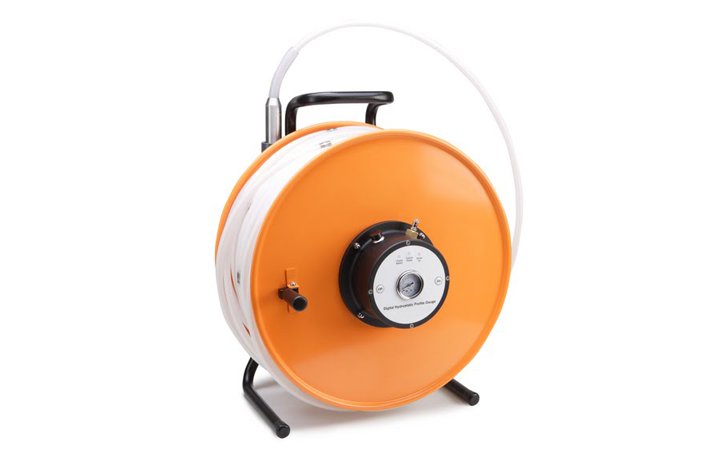 The Soil Instruments Digital Hydrostatic Profile Gauge system comprises a probe assembly attached to a nylon tube which connects to a reel/hub assembly, data are transfered via a wireless link to a PDA.

The Digital Hydrostatic Profile Gauge is used to monitor the profile of settlement or heave and is predominately used for monitoring beneath embankments or structures where access to the surface is not possible.

The system comprises a probe assembly, attached to a nylon tube containing a hydraulic solution, which connects to a reel/hub assembly.

The reel contains a precision hydrostatic pressure sensor, power supply, analogue to digital converter and a Bluetooth transmitter. Data is transferred via a wireless link from the cable reel to the Field PC and saved each time a reading is taken.

Wireless connection between the instrument and the Field PC makes taking readings fast and simple.

The Digital Hydrostatic Profile Gauge is positioned on the concrete block or reference datum pin.

The probe is pulled along the borehole and is positioned using physical markers on the connecting tubing.

The Field PC software guides the user to position the probe at each one-metre marker interval; these are marked and numbered on the tubing.

At each interval, the user initiates a reading which records the pressure differential at that point between the reel and the probe. This reading is transmitted from the cable reel to the Field PC via a wireless link.

The probe is datumed at an external topographic reference point for each profile. As the distance position of the probe is known from the markers, subsequent profiles can determine the delta pressure at each given point. From this information, the change in elevation of each point along the profile can be measured.

The probe must be passed along a horizontal or inclined borehole at known intervals along the hole and the reel must be zeroed in the same place (eg a reference point on a concrete pad adjacent to the borehole) for each run.

The initial survey will give a profile of difference in height between the reference point and the points along the borehole. If the pad (reel) is surveyed in then this profile is an absolute value with respect to the site datum. Subsequent readings will then display a delta absolute profile for each borehole. With care in use the profiles are accurate to within 10mm.