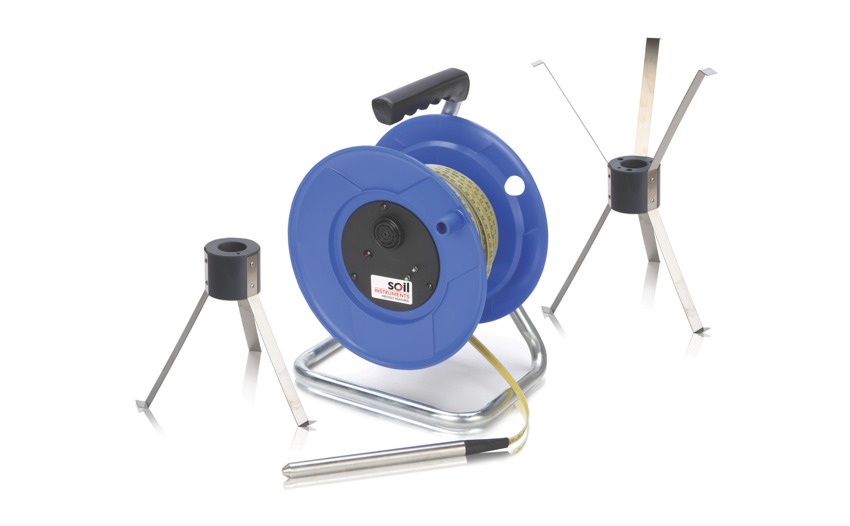 The Soil Instruments Magnetic Extensometer is used to monitor soil or rock settlement and heave in excavations, foundations, dams, and embankments, tunnels, shafts and sheet piles. Data from the extensometer indicate the depths at which settlement has occurred as well as the total amount of settlement.

The Magnetic Extensometer System comprises a probe, a graduated tape on a reel and an access pipe along which magnetic targets are positioned. A datum or reference magnet is ﬁxed to the bottom pipe. The probe design incorporates triple reed switches. As the probe moves along the access pipe, it detects the magnets by way of a reed-switch circuit closing. This causes a light to display and a buzzer to sound at the reel.

The bottom of the access pipe is anchored into stable ground such as bedrock. Any settlement or heave of the ground being measured will cause the magnets to move along the axis of the pipe. Various types of magnetic targets are available. There are threelegged and six-legged spider magnets, retained by leaf springs, for use in boreholes. Plate magnets are also available for placing in soil or ﬁll when adding further sections of tubing during construction.

This instrument is available to hire. Call 01825 765044 or email sales@soilinstruments.com to check availability or to place an order.

The access tubing is installed to the length required, by coupling together successive three-metre lengths. Magnetic targets are installed as needed along the tubing, to the required depth.

Fixed joints or telescoping should be used if large amounts of ground movement in the axis of the tubing are expected.

Measurements are taken by lowering the suspended probe down the access pipe and using the graduated tape to measure the distance from the top of the access pipe to each magnetic target.

By taking repeated probe measurements of each target over a period of time, this shows any displacement of the ground being measured. Changes in this distance relative to the datum magnet near the base of the pipe will reflect the rock and soil movements along the axis of the access casing.

Alternatively, readings may also be made relative to topographic survey measurements taken from the measuring point at the top of the access tubing.

The Magnetic Extensometer System is installed at locations where monitoring of settlement or heave is needed.