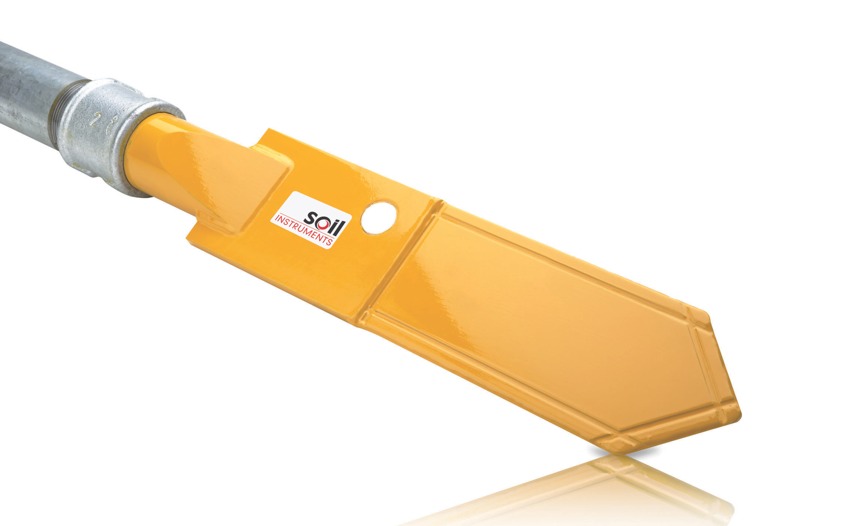 The Vibrating Wire Push-In Pressure Cell is normally installed in vertical boreholes and measures total horizontal stresses. They are often installed in stiff clay behind and in front of retaining walls, in soft puddle clay cores of old embankment dams and in glacial till adjacent to sea cliffs.

The Vibrating Wire Push-In Pressure Cell measures total earth pressures in all soil types. The cell is spade-shaped and pointed at one end. A piezometer within the unit allows the measurement of pore water pressure and therefore the derivation of effective pressure.

The cell is formed from two sheets of steel welded around the periphery, with the narrow gap between the plates being filled with oil. A Vibrating Wire pressure transducer is connected by a short steel tube, forming a sealed hydraulic system.

A borehole is formed to a depth just short of the installation level.

After the removal of the push-in casings, the borehole is grouted. The sensor cables connect the transducers to either a terminal unit or data logger.

The Vibrating Wire Push-in Pressure Cell monitors changes in earth pressure associated with the construction of excavations, embankments and dams. The instrument is capable of providing total pressure, earth pressure and ground water pressure readings. Vibrating Wire Pressure cells are often installed in stiﬀ clay behind and in front of retaining walls, in soft puddle clay cores of old embankment dams and in glacial till adjacent to sea cliﬀs.